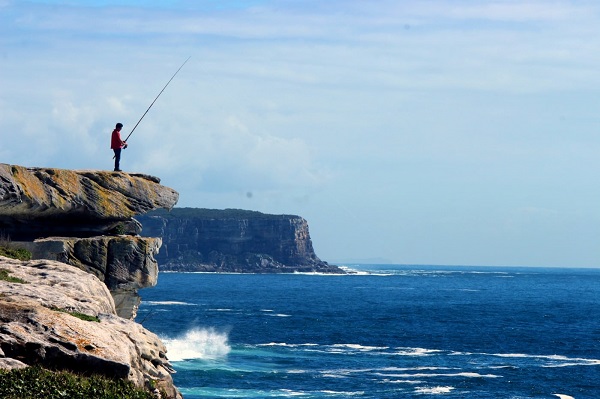 Rock angling is one of the top outdoor activities in Hermanus and popular fish that can be caught on our shore line includes but are not limited to:

Keep in mind that to fish in Hermanus or anywhere on the South African shore-line you will have to present a fishing permit that can be bought at a post office.

The price for a fishing permit is around R80.

Angling in Fisherhaven can be hard as the lagoon is shallow around the sides. The best spot to start is about a 5 min walk from the Lake Marina Yacht club towards the lagoon mouth. You will find a broken jetty and the most popular fish you will find in that area will be Shad, White Stumpnose and Gernet. Prawns and white mussels will be the best bait to use to catch these fish.

If you have access to a small boat or fishing kayak you can travel by water to the lagoon mouth. This will increase your change to catch some fish like:

There are no fishing jet ski’s allowed on the lagoon.

Onrus coastal line is one of the great fishing spots in Hermanus regardless if it is high or low tide. There is plenty hottentot seabream [nick name Hotties] te be caught between the kelp [brown seaweed that grows in shallow water] Hotties can be caught anywhere between the coast lines of Onrus and Vermont.

Kabeljou [Cob], Elf, Black Tail, Galjoen and many other fish species can be caught directly from the Onrus beach. There is plenty parking space and and fishing spots is less than a 5 minute walk.

Die Kombuis [The Kitchen] is a popular area in Hermanus to catch the blue veined fish Galjoen. Die kombuis is just a 2 in walk from the Windsor Hotel and right next to the famous whale watching spot in Hermanus CBD. You need to get some red-bait to catch Galjoen. Other fish in this area is hotties and black tail.

Galjoen season opens the 1st of March and closes 15 October.

At the rocks on both sides of old harbour in Hermanus you can catch silver fish also known as the Carpenter [silver fish is a small, elongated sea bream with a silver-pink body and faint, pale blue spots arranged in several horizontal bands along its sides]

From Sanbaai to the New Harbour there are many spots to cast for galjoen, hotties, breams and black tail. You can use red bait, white mussels and pilchards as bait. You are allowed to get some red bait from the rocks on low tide provided that you have a bait permit that you can get from the local post office.

It is worth mentioning that these areas have a lot of shark species including the pajama and banjo shark. Catching these fish is not illegal but we recommend a catch and release system.

Die gang [Direct translation – the passage] just outside Hermanus CBD is another great spot to fish for cob, hotties and red roman. There is a parking area but if you prefer you can walk the cliff path that is currently the most frequented tourist attraction in the town.

Chokka or squid, red bait, pilchards and white mussel can be used as bait. Make sure to take some water if you decide to walk the cliff paths.

The plaat is an stretched area of white sand between Grotto Beach and Sandford. White mussels, red bait and pilchards is the best bait to use in this area.

This The Klein Rivier estuary just outside Hermanus is a calm lagoon where you can catch shad and Leerfish [also known as garrick] Fishing from a boat and fishing kayak is allowed. Leerfish can grow up to 20kg and is the top fish to make the famous South African pickled curry.

Pilchards, white mussel and live bait is preferred as bait in the Klein Rivier lagoon. Fishing times are best an hour before high tide and full moon.