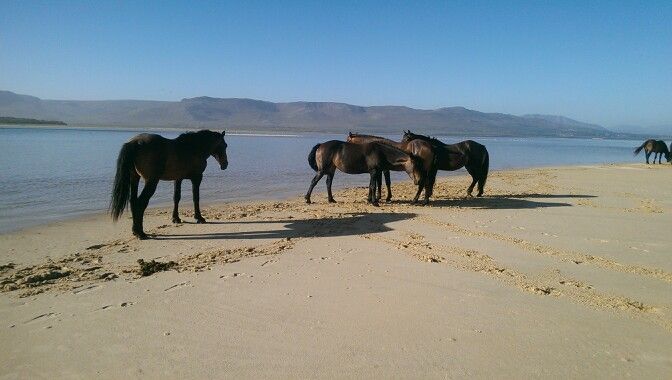 Residents take great pride of their Wild Horses in Fisherhaven

Fisherhaven is only 10 minutes away from Hermanus that is also well know for whale watching.

There are mainly two families of horses that roams in Fisherhaven only 10 minutes drive from Hermanus in the Western Cape. They are to be seen from the Rooisand Nature reserve close to Kleinmond up to Fisherhaven where they roam between the streets and homes of local residents. These are the only horses in South Africa known to live in the Wetlands. On hot summer days it won’t be a surprise to see them playing or relaxing in the salty waters of Fisherhaven lagoon.

These horses are unique and that they are the last descendants from the horses that was brought to South Africa during the Anglo Boer war in 1899 to 1902. During this period the British Empire shipped 360 000 horses to South Africa.

The average life expectancy of a horse was around 6 weeks

The average life expectancy of a British horse, from the time of its arrival in Port Elizabeth, was around six weeks.

The number of horses killed in the war was at the time unparalleled warfare. In the Relief of Kimberley, French’s cavalry rode up to 500 horses to their deaths in a single day. The wastage was particularly heavy among British forces for several reasons: overloading of horses with unnecessary equipment and saddlery, failure to rest and acclimatize horses after long sea voyages and, later in the war, poor management by inexperienced mounted troops and distant control by unsympathetic staff.

Horses were on occasion slaughtered for their meat. During the Siege of Kimberley and Siege of Ladysmith, horses were consumed as food once the regular sources of meat were depleted. The besieged British forces in Ladysmith also produced chevril, a Bovril-like paste, by boiling down the horse meat to a jelly paste and serving it like beef tea.

The Horse Memorial in Port Elizabeth is a tribute to the 300,000 horses that died during the conflict.

Some horses was hidden in the Kleinmond valley by the Boers to hide them from the British Soldiers. The horses in Fisherhaven could probably be the last decedents of the Anglo Boer War Horses more than a century ago.

Communication on WhatsApp groups between the locals follow the interest and healthcare of the horses. They advise visitors to view and photograph the horses, but are urged not to touch or interact with them in order to allow them to “stay wild”.