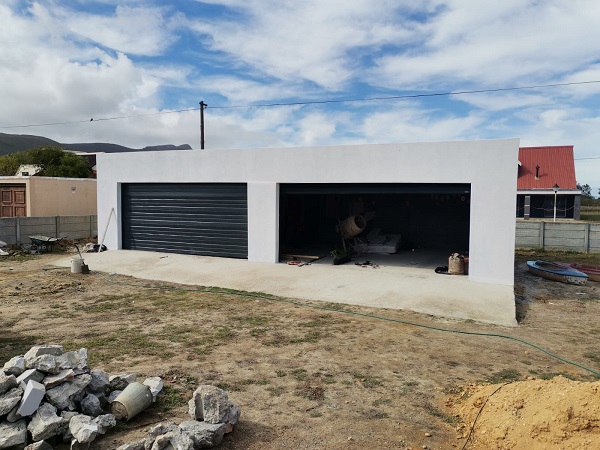 For us the little new house that we bought in April 2021 was the highlight of the year. We wanted to upgrade the cute 3 bedroom house to a 5 bedroom house with a quadruple garages. We were kind of new in Hermanus and did not know any reliable builders so we placed an advertisement on Facebook. More than 30 people replied with their numbers on the ad but only one person made an effort to call – Johnwinn Withbooi. We arranged a meeting and after receiving his quotation we agreed that Zazu contractors will be our builders. Here follow the ZAZU Building Contractors Review

Time: 09:00. The builders arrived and we were slightly disappointed that they were late on the first day but our excitement was on another level so we did really care that they were late “The building and Renovations was about to start”. While the builders were unpacking their tools Johnwinn and myself sat around the table going through the plans.

At this point I believe that everything was understood and lines were marked with white sand on the ground where the foundation was ready for digging. To my surprise everyone went to go and sit and had a 45 minute lunch break. I found it a bit strange but lot of construction workers do take an early lunch before a hard days work.

Eventually the digging started and we were back on schedule.

Once again there was a lunch break and this time it was one hour. By this time Johnwinn has left for some other stuff he had to do. Now this was not bothering me at the time but considering that the builders we used to build our house in Caledon arrived 07:00 in the morning and worked until sunset.

After lunch the builders continued and with about 6 meters to go and the time now being 15:00 I noticed they started to pack up their tools. I asked the foreman what is going on and he said that they are going to continue tomorrow.

Friday the 2nd of September

The foundation was dug and filled with steel and concrete. I was pleased and it was a good week. I have to mention that arriving after 08:30 and leaving 15:00 with a total of 1 hour and 45 minute lunch and tea break in between was now a standard procedure.

We are now 4 weeks into the project and our disappointment could not be expressed in words.

I have become the building project manager [with no experience] as Johnwinn was only on site when he dropped his staff. The building of the garage was a simple straight forward job or that is what I thought. The two side walls run skew and the garage door openings was 600mm over the measurements on the one side and 700mm on the other. Then the middle column of the garage was off-center to the two incorrect sides and at this stage I knew this was a disaster in making.

I have explained to them the importance of getting the garage wall right to the tee many times as I have already ordered the two large doors from Amoroc Doors in Hermanus and we could not afford making mistakes.

When I noticed the measurements was wrong the cement work was still wet and I made them fix the walls according to the measurement on the plan. After I spoke to the foreman I realized that Johnwinn has not given any plans to the builders. From thereon I had to take over the leading role to make sure that everything goes according to plan.

Not once did Johnwinn measure anywhere on the job or give his building crew sizes that they could work with and it was left to me to do the measuring and supply the sizes for the builders. I was not happy about this upspoken arrangement after all, I did hire him to do so.

Plastering of the garage and walls

Things got from bad to worse. The plaster job on overall was not bad but they had no idea about the consistency of the thickens the plaster should be. This meaning that walls appeared skew and below the lintels the line ran up to 90mm off giving it a nasty level line when closing the garage doors.

Johnwinn in general is a likable person. But he tends to dwell off topic fast and does not have the ability to solve problems. I have mentioned and pointed out many problems over the 2 months and the reply was always the same “Ons gaan dit nou reg maak” which was never resolved. We still have a room that needs to be plastered and our 70 sqm veranda floor drops almost 200mm from left to right. I will have to get this fixed as we can not tile the floor the way that it is.

Another big problem was the renting of concrete mixers, compactors, water-pumps and scaffolding. As renting these items are pricy planning is essential. When I was asked to hire some of these products I could clearly see that they were not ready to use the machinery. Guaranteed by Johnwinn that they will use the equipment that same day I then hired and paid for delivery for some of the machinery. In one instance I had to fork out almost R2k for concrete mixers and compactors that was not used for 3 days and made believe each morning that it would be used.

I still owe ZAZU contractors roughly 1.5k but the outstanding work would cost much more in labour alone. I was sweet talked into giving him more money than I should have and now there is no more ZAZU contractors building on our premises. I believe that Zazu has started a new project and left me on my own to sort out the problems and get the walls plastered that I have already paid for.

In conclusion of my review I honestly would not suggest ZAZU contractors to anyone I know unless you are willing to be the project manager, take your own measurements, do a lot of unnecessary driving and plan your own building equipment rentals.